We Are Veterans Serving Veterans. 8/10/22: Joined by the surviving spouse and daughter of Sergeant First Class Heath Robinson, President Biden signed the Honoring Our Promise to Address Comprehensive Toxins Act of 2022, or PACT Act.

7/28/22: The U.S. Senate did not reach the 60 votes needed to move the bill forward. The initial version of the bill passed the Senate 84 to 14, and then was slightly corrected for technical reasons in the House. Surprisingly though, when the bill returned to the Senate for final congressional approval, it could not get the 60 votes needed to end discussion and continue to the vote to actually pass the bill.

Where does the bill go from here?
The Senate will continue discussing the bill, including the Camp Lejeune Justice Act, and is expected to reschedule the vote to end discussion (known as cloture). Assuming the next cloture vote is successful, then the Senate will vote to pass the bill. Likely, the bill will pass in one form or another and will be signed into law by the President.

When will the bill move forward?
The cloture vote (which will then allow a vote to actually pass the bill) has not been rescheduled yet. It could take place some time next week, or it might have to wait a month or more until after the Senate takes a recess. After that, the President will probably sign it into law very quickly.

Why hasn’t the Senate pass the Camp Lejeune Justice Act yet?
The Senators who blocked a vote to pass the bill and send it to the President cited concerns over mandatory spending. Between the right to sue the government, and additional healthcare and VA disability benefits authorized in the bill, it would cost a lot of money. The Congressional Budget Office estimated it would cost about $282.7 billion over the next 10 years. But it’s expected that after some negotiation, the Senators will come to an agreement and the bill—even if pared down a bit—will pass Congress with overwhelming support and the President will sign it into law.

7/14/22: The “Honoring our PACT Act” was passed by the House on Wednesday, July 13. The bill passed the United States Senate in June, but it must return to that chamber briefly due to a technical amendment made by the House before being signed by President Joe Biden.

7/6/22: Due to a procedural error, the Honoring Our PACT Act of 2022 progress has slowed temporarily. The Senate must make a small amendment before sending the bill back to the House for approval to be sent to the president to be signed into law. President Biden promised to sign the bill as soon as it comes to his desk. Congress is current in recess but is expected to return this week and resume action on moving the bill forward.

6/16/22: The Senate has passed the Honoring our PACT Act of 2022 bill today. Since the bill was amended in the Senate, the House must approve the amended bill before heading to President Biden to sign.

6/13/22: Motion to invoke cloture on Tester substitute amendment to the Honoring our PACT Act passed 78-17. The Senate will resume discussion on the bill at 11:00am Tuesday, June 14th.

Background: Located in Jacksonville, North Carolina, Camp Lejeune is an active Marine Corps training base. Nearly one million Marines and their families stationed at Camp Lejeune between 1953 and 1987 were exposed to harmful chemicals due to water contamination.

Cancer and serious illness victims can be compensated under the Camp Lejeune Justice Act of 2022.
Don’t let yourself be left out. One million service members and others could have been affected. The Senate is about to pass the bipartisan Honoring Our PACT Act of 2022, which includes the Camp Lejeune Justice Act. For the first time, people who worked, lived, or were exposed in utero to contaminated water at
Camp Lejeune between 1953 and 1987 will be able to file a claim in federal court in the United States. Our attorneys are committed to representing service members and their families who have suffered medically recognized injuries as a result of toxic chemical exposure at Camp Lejeune.

What was the source of the water contamination at Camp Lejeune?

Over 70 dangerous chemicals were discovered to be present at Camp Lejeune, with some showing up in testing at rates 3400 times higher than what safety standards allow.
The four most significant chemical contaminants discovered in Camp Lejeune water tests were:

Finally, in 1985, the military shut down two wells that contained the contaminated water. The move came only after heavy pressure from veterans, families, and veterans advocacy groups.

The bill proposes the following requirements for an individual to bring legal action in the United States District Court for the Eastern District of North Carolina:

Exposure to the toxic contaminated water has been linked to a long list of diseases and disabilities, including serious health problems for children who were exposed while in the womb.

Symptoms of Children Exposed in Utero:

Veterans exposed to contaminated water at Camp Lejeune between 1953 and 1987 may be eligible for monthly VA disability benefits.

Berry Law can help qualifying Veterans to appeal disability claims and seek other benefits related to Camp Lejeune water contamination. We work with veterans and their families nationwide. Contact us today to discuss your case.

What are the symptoms of exposure to contaminated water in Camp Lejeune? Watch Now 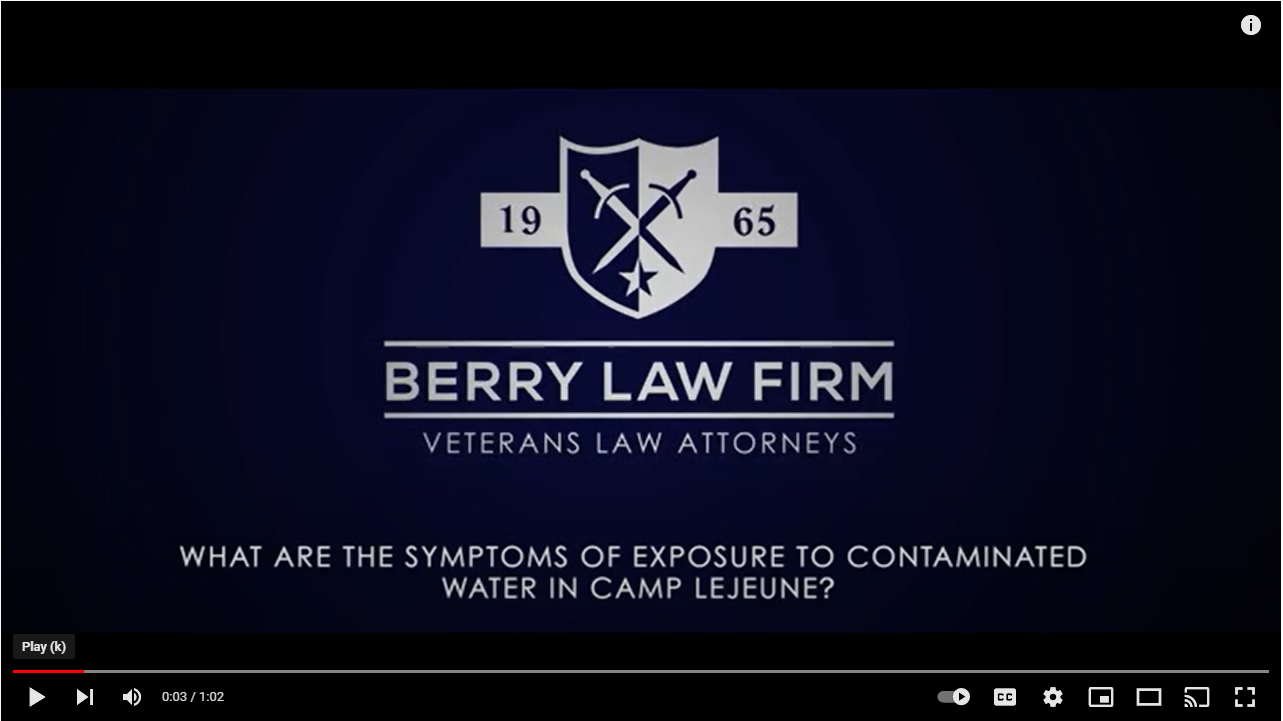