America’s Veterans are entitled to benefits for injuries that were the result of sacrifices made while serving our country, and this includes Veterans in Houston, where there are roughly 282,500 Veterans. If you are a Veteran who needs help appealing a VA decision in Houston, contact a skilled Houston VA disability lawyer at Berry Law to see how we can help. 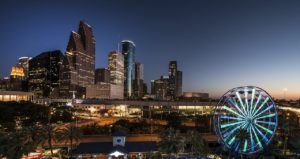 Berry Law Firm has represented Veterans and servicemembers from coast to coast. We fight for Veterans’ disability appeals at every VA Regional Office in America and are dedicated to ensuring Veterans’ rights are protected. If you have been denied VA benefits, or received an inadequate rating or effective date, you may want to enlist the support of a Houston VA disability attorney. The following article is meant to help you understand the VA appeals process in Houston.

Starting a VA Claim in Houston

You can submit your VA disability claim from any location in the country, regardless of where you served or where you currently live.

You can use the VA’s website to apply or get help from a local VSO (Veterans Service Organization).

To get started, you need to complete VA Form 21-526EZ or apply online through the VA eBenefits portal. You may need to submit additional forms based on your individual circumstances. Other relevant forms include VA Form 21-0781 or 21-0781a for PTSD claims, and VA Form 21-8940 and 21-4192 for Individual Unemployability (TDIU). Once completed, these forms can be submitted to the VA.

Initial claims can take a long time to process, although they can be expedited for certain reasons, including:

It is a good idea to put in an initial claim as soon as possible to establish an early effective date. Once set, the effective date will not change regardless of how long it takes to fully settle a claim, which could take several years depending on the claims you are filing. The importance of the effective date is that the Veteran is entitled to back pay from the final decision date all the way back to the effective date.

Submitting a VA Appeal in Houston

Unfortunately, the VA does not always make the correct decision for a Veteran’s initial disability benefits claim. When initial claims are denied, given a lower-than-expected rating, or applied to an incorrect effective date, you can appeal the decision. This is the first part of the claims process that a Houston VA disability lawyer from Berry Law could help.

There are several different ways to appeal a ruling based on what you believe the VA’s error was. Our team at Berry Law understands the different appeal lanes and the best way to utilize each lane. We can help you present the most compelling appeal for your case, which has helped other clients receive over $100 million in back pay awards.

We have representatives in multiple cities, but the location of your attorney does not actually impact the process because it is Federal in nature. This means that you do not actually need a VA disability lawyer in Houston. In fact, our team has helped clients in Houston and many other cities within Texas. We have helped clients in every state in the US, along with Veterans in US territories and foreign countries.

Most appeals begin with filing a Notice of Disagreement (NOD) with your VA Regional Office. This form notifies the VA that you disagree with the decision that has been made. NODs can be as simple as filling out the form and commenting “I disagree” or can include dozens of pages of supporting material. The Regional Offices in Houston is located at: 6900 Almeda Rd, Houston, TX 77030.

The Regional Office will reply with a Statement of Case (SOC), which presents the state of the case and is sent to the Board of Veterans’ Appeals (BVA). The BVA will review the material to make its own determination. If you are unsatisfied with the BVA decision, you can then appeal to the US Court of Appeals for Veterans Claims (CAVC) for further adjudication.

If you would like help appealing a VA decision, please contact a Houston VA disability lawyer at Berry Law Firm to see how we can help.

Not every Houston VA disability attorney is identical. If you decide to hire an attorney to help with your claim, it is a good idea to select one that will continue working with you throughout the multi-year process and who has experience with appeals at every step of the claims process. A lengthy history of practicing Veterans law is a good indication that a Law Firm will not abandon you in the middle of an appeals process. Some firms only recently added Veterans Appeals to their Social Security practice and are not invested in actually helping Veterans.

The hardest aspect to measure is how well your lawyer will perform when it comes to extensive research, well-structured arguments, and compelling evidence. More experience often translates to superior work product, but not always.  You may want to read reviews and testimonials from a potential law firm before signing up.  You may also want to ask about the level of research they perform on each individual case and what some of their most effective arguments have been in the past.

Military service may also be important to you. Opting for a Houston VA appeals lawyer who has actually served in the military can make communicating about difficult issues easier and reduce the amount of time that you need to spend explaining how the military works. Having shared military values with your law firm can make the process more comfortable and less stressful. Will your law firm understand the intense stress of combat?

Making the right decision on hiring a law firm can make a significant difference for the outcome of your case. Contact an experienced Houston VA disability lawyer today to see how we can help you with your claim. We also serve Dallas and San Antonio.

Berry Law Firm was founded in 1965 by John Stevens Berry, Sr., who spent part of his time in the Army serving in Vietnam. During a JAG tour in Vietnam, he successfully defended Green Berets against murder charges among other courtroom victories for his fellow servicemembers, resulting in major news coverage and an elite reputation. While developing a criminal defense practice, he also helped Veterans with legal work, particularly supporting fellow Vietnam Veterans who had been disabled in service. This is how our Veterans disability practice began.

The firm is now run by John S. Berry, Jr., who retired as a Lieutenant Colonel from the National Guard, after earlier Active Duty tours in both Bosnia and Iraq. John has built a Firm that lives on military tradition and values. In fact, the organization became the first law firm to ever receive the HIREVets Platinum Medallion, presented to companies that display a dedication to hiring Veterans.

On our staff are Veterans from the Army, Navy, Air Force, and Marine Corps. We have attorneys hailing from each branch, and are proud to have both Officers and Enlisted, with service ranks ranging from E2 – O6 (including an E9). Our Veterans have served in Vietnam, Bosnia, Kuwait, Iraq, Afghanistan, at sea, and elsewhere around the world, and have the accompanying ribbon racks of sustained superior service to the country. Also on staff are members of the Reserves and National Guard still wearing the uniform.

Resources for Veterans in Houston