In a prior post, we discussed the dilemma endured between the U.S. Department of Defense and the Department of Veterans’ Affairs, as they worked to integrate their respective computer systems so that they may better share information. However, the dearth of information stored electronically still appears to be a problem.

According to a report by the Center for Investigative Reporting, the VA has spent $537 million on a computer system to address these concerns. However, 97 percent of current claims are still filed on paper. The report also included a photo (and description) of an office in North Carolina that was so dominated with paper files that it “threatened the structural integrity of the building.”

Meanwhile, the VA admits that it is overwhelmed, but it gaining control of the situation, and that digital protocols will affect the continuing backlog by 2015. In fact, the undersecretary for benefits will soon testify before a Senate Committee on Veterans’ Benefits on these issues.

We certainly hope that this is will be the case, because the influx of new claimants has grown tremendously with new ailments (i.e. Agent Orange, Gulf War Syndrome) being allowed for compensation. Also, with the war in Afghanistan winding down, it is certain that the backlog of claims will continue to grow.

The increasing malaise of claims creates a continuing need for claimants to seek the services of an experienced attorney. A large number of claims lay are rejected or lay dormant in the system because of incorrect information, as well as improper descriptions and authorizations. A lawyer can help in mitigating the common delays that plague most disability claims. 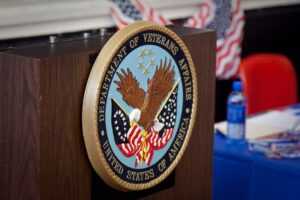