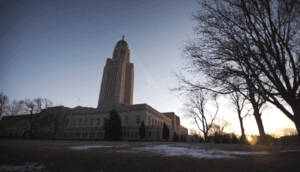 Berry Law is one the nation’s leading Veterans disability law firms in the country, serving clients in every state in the US along with some Veterans living abroad. Headquartered in Lincoln, Nebraska, our team of experienced VA appeals lawyers could help you fight for the disability benefits you earned.

If you are a veteran who was injured or developed a disabling condition while serving our country, you deserve full benefits if you have an ongoing disability. It’s a promise that the people of the United States make to you when you serve.

Unfortunately, the support you need isn’t always provided to you automatically. Despite recent reforms to the disability appeals process, getting the money you’ve earned can still be challenging.

If you are a veteran seeking benefits in Lincoln, Nebraska, know that qualified legal help is available nearby. PTSD Lawyers is staffed with veteran lawyers who have experience with every VA appeals court in the nation. We’re prepared to help you pursue the disability rating and benefits you need.

Our VA disability benefits attorneys are waiting to discuss your case. Contact PTSD Lawyers now for a free consultation.

The Nebraska Department of Veterans’ Affairs releases annual statistics about Nebraskan veterans. In 2012 to 2013, veterans receiving various forms of aid in Nebraska received a total of $1,120,090.68, $96,964.83 of which went to veterans in Lancaster County.

According to the Federal Department of Veteran Affairs, there were 130,126 veterans in Nebraska as of September 30, 2017. That represents 9.5% of the adult population of the state.

These tens of thousands of veterans deserve the best for their sacrifices. According to the Omaha Daily Record, Lincoln veterans should see improved veteran’s services soon.

In 2019, The Lancaster County Veterans Treatment Court was awarded a $496,000 grant from the U.S. Office of Justice Programs and U.S. Department of Justice. This three-year grant is supposed to fund safe and sober housing, transportation assistance, and better supervision for veterans, in addition to evaluation and training for the court team.

Nebraska follows the same laws as the rest of the nation regarding disability benefits, but the Nebraska Department of Veterans’ Affairs (NDVA) is set up specifically to serve and represent Nebraskans to the federal Veterans’ Affairs programs.

The NDVA published a guidebook to help Nebraskan veterans understand the VA system and with contact information and resources specific to Nebraska. These resources are important, since they are available to you when you begin the process of claiming VA disability benefits.

Veteran Affairs Lincoln, NE, is also known as the VA Regional Office or VAROO. You can find it at 3800 Village Drive. They’ll also explain the appeals process to you. After they advise you, it’s a good idea to find a VA disability benefits attorney with experience in Lincoln to help you complete your claim.

Veterans wishing to apply for VA disability compensation will need to fill out an application for benefits. They can do this online through the VA’s eBenefits portal, by mailing in VA Form 21-526 EZ, or with the assistance of an accredited VSO (Veteran Service Officer).

Unfortunately, a Lincoln VA disability lawyer from Berry Law is unable to help with the first step in the application process due to legal requirements. However, we often urge Veterans to seek the help of a local VSO when they initially apply for benefits.

It is important to note that the earlier you apply for benefits, the more compensation you are typically entitled to. This is because the date you submit your claim becomes your effective date, or the date your payments must go back when your VA disability claim is granted.

How to Receive VA Disability Compensation in Lincoln, Nebraska

Many veterans are denied benefits because the VA rejects the documentation they send as insufficient. Sometimes, there’s an easy mistake to rectify. Sometimes, you have to jump through several complicated hoops to get what you need. That’s when having a qualified lawyer can help.

Appealing Your VA Decision in Lincoln

When the VA makes a decision on your claim, they will issue a rating decision. The rating decision outlines what claims were granted, the percentage they were assigned, and why your claim was denied (if your claim is not granted). Veterans whose claims were not granted or were given a lower than expected rating have one year to appeal their claim. This is the fist step in the VA claims process that a Lincoln VA disability lawyer from Berry Law can help. The VA appeals lawyers in Lincoln from Berry Law can fight to ensure you are receiving the compensation you’re entitled to.

Under the new VA Appeals Modernization Act (AMA), a Veteran has different routes or lanes to appeal their decision. The VA allows for three different appeal lanes, each with their own benefits and disadvantages.

If you need assistance appealing your decision, a Lincoln VA disability lawyer from Berry Law can help.

Military service may also be important. Choosing to work with a VA appeals attorney who has deployed can make communication easier. Will your attorney understand your military experiences the way another Veteran would? Selecting the right lawyer can make a big difference in the outcome of your claim. If you’re a Veteran that wants to appeal your rating decision, you could benefit from the assistance of an experienced VA disability lawyer in Lincoln.

Benefits of Having a VA Disability Attorney in Lincoln, Nebraska

Whether you are just now applying for VA benefits or need to appeal a rejected or undervalued claim, the knowledgeable Lincoln VA disability attorneys at PTSD Lawyers can help. We can review all of your existing paperwork to discover which parts might be flagged by the VA.

Because we have extensive experience handling these claims for veterans like you, we won’t miss anything important. We can help evaluate your appeals options, which include higher-level review, supplemental claims, and appeals to the board. The system is complicated, despite recent streamlining, and knowing exactly how the system works is crucial.

Some people may say that it’s not necessary to contact a lawyer to seek the disability benefits you deserve. But statistics show that many qualified applicants are denied the compensation they are rightly owed.

You can start your disability claim on your own, using the VA Form 21-526EZ or applying online. In the event that you are denied, or your rating is lower than you think you deserve, a VA certified disability attorney could make all the difference.

Our team of Lincoln VA disability lawyers are dedicated to providing fellow Veterans the firepower they need to get their VA claim approved. Why? Because we are a team full of Veterans. Founded in 1965 by Vietnam Veteran John Stevens Berry, Sr., Berry Law opened as a criminal defense firm committed to protecting the constitutional rights of clients. However, Berry often heard from fellow Vietnam Veterans who needed help getting their VA claim approved.

The firm is now run by Army Veteran John S. Berry, Jr., and boasts one of the largest VA disability practices in the country. The team features attorneys from the Army, Navy, Air Force, and Marines. In fact, Berry Law was recently recognized by the Department of Labor for our dedication to hiring, retaining, and training Veterans. Our Veteran staff bring their passion for our nation’s heroes to every VA decision they appeal. If you need a Lincoln VA disability lawyer to help you appeal your decision, contact Berry Law today. We also serve Omaha.

How a VA Certified Disability Attorney Can Help

It’s important to contact a VA-certified lawyer, like ours at PTSD Lawyers in Lincoln, to get the disabled veteran benefits you need. Attorneys sometimes get a bad rap because of a few bad apples, which is why the VA developed the certification system.

When you contact PTSD Lawyers, you can trust that we’re fully informed on the current VA procedures and that we will only do what is in your best interest. Many of our lawyers have served in the armed forces, and we are dedicated to helping veterans like us.

If you’re a veteran who is seeking disability benefits in Lincoln, you don’t need to wade through the red tape of getting your benefits alone. Whether you need a higher disability rating or need to appeal a rejected application, we know how to make the system work as it should for you.

PTSD Lawyers is ready to begin your free consultation. You can call us or request an online appointment today.