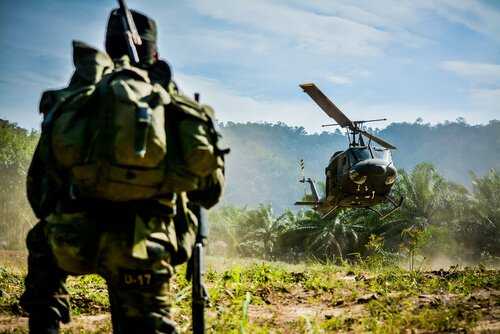 Exposure to Agent Orange in Vietnam

Between 1962 and 1971, the U.S. military used low-flying, C-123 transport planes to spray millions of gallons of “tactical herbicides” over South Vietnam. The military code-named the program “Operation Ranch Hand.” Agent Orange was the most commonly used of those herbicides.

The military’s goal was to destroy the dense foliage that Viet Cong and North Vietnamese fighters used for cover and to kill the crops they relied on for food. At the time, U.S. military and political leaders insisted that the operation would not harm humans. They believed it would “save American and South Vietnamese lives,” The New York Times’ Clyde Haberman writes.

Today, however, most Americans do not think of the gains that Operation Ranch Hand achieved in the Vietnam War. Instead, they think of its tragic consequences. Nearly five decades after the program ended, its legacy lies in the millions of veterans and Vietnamese residents who have suffered severe health problems from exposure to Agent Orange and other dangerous herbicides that the military used in Vietnam.

Here, we provide a brief history of Agent Orange and describe how veterans and, in some cases, their children may qualify for VA benefits as a result of the herbicide’s lingering effects on their health.

Agent Orange: The Most Commonly Used of the ‘Rainbow Herbicides’

The United States was not the first country to use tactical herbicides in Southeast Asia, Haberman notes. The British used defoliants in the 1950s to expose communist fighters in the jungles of Malaysia. However, the U.S. military used herbicides on a much more massive scale in Vietnam.

During Operation Ranch Hand, the U.S. sprayed an estimated 19 million gallons of herbicides over an estimated 4.5 million acres of jungles, fields, rivers and roads. In addition to Agent Orange, the military sprayed Agents White, Blue, Green, Purple and Pink. The “Rainbow Herbicides” got their names from the colored stripes painted on the 55-gallon drums that the military used to store them, History.com notes.

Agent Orange proved to be the most effective herbicide. As a result, the military used the herbicide in all four Corps Tactical Zones in South Vietnam. According to the U.S. Department of Veterans Affairs (VA), the most heavily sprayed areas included forests located in or near:

Between January 1965 and April 1970, the U.S. military sprayed an estimated 13 million gallons of Agent Orange. The military also tested and stored the herbicide in areas outside of Vietnam.

As Britannica.com describes, Agent Orange actually was a blend of two herbicides. One of those herbicides produced a highly toxic pollutant called 2,3,7,8-tetrachlorodibezno-p-dioxin (TCDD), or “dioxin.” Even in small amounts, dioxin can be toxic. However, the military used a concentration of Agent Orange that was 50 times the concentration which manufacturers recommended for destroying plants, the BBC reports.

“But Agent Orange’s legacy was only beginning,” Haberman writes. “More than 40 years later, it still casts a long shadow.”

In 1979, a group of veterans brought a class-action lawsuit against seven chemical companies that produced the herbicide, according to History.com. Five years later, the companies agreed to pay a $180 million settlement that benefited roughly 250,000 veterans and their families. By the time the U.S. Supreme Court affirmed the settlement in 1988, the value of that settlement, with interest, had grown to $240 million.

The awareness generated by the lawsuit and advances in medical research spurred Congress to pass the Agent Orange Act of 1991. The law established that certain disorders linked to exposure to Agent Orange and other herbicides used in Vietnam during the Vietnam War era would be presumed to be connected to a veteran’s service. In other words, to qualify for VA disability benefits, certain veterans no longer needed to prove the association between their health problems and their military service.

The VA presumes Agent Orange Exposure among veterans who served:

In June 2015, the VA expanded the group to include those who served in the Air Force or Air Force Reserves between 1969 and 1986 and who regularly and repeatedly operated, maintained or served aboard C-123 planes that sprayed Agent Orange over South Vietnam.

Many other veterans can qualify for VA disability benefits due to Agent Orange-related disabilities. However, they must prove exposure to the herbicide. Those veterans include those who served:

As ProPublica reports, members of those groups and their advocates continue to press for presumed service connection status.

Additionally, the VA provides benefits to the biological children of veterans who served in Vietnam and Korea who suffer from spina bifida and many other defects.

The BBC reports that, in addition to an estimated 2.4 million U.S. veterans exposed to Agent Orange, an estimated 3 million Vietnamese men, women and children suffer health problems that are believed to be related to their exposure to the herbicide.

The U.S. and Vietnam governments have teamed up to clean Agent Orange-contaminated soil in many areas of Vietnam, particularly around military bases where the military stored the herbicide. The program involves heating soil in order to remove the toxins.

As Haberman suggests, the lesson learned from the use of Agent Orange in Operation Ranch Hand is to recognize that many programs initially deemed to be safe and necessary may, instead, produce “unwelcome consequences.”

Fortunately, our country has made significant progress towards recognizing the full extent of those consequences and towards providing the benefits which veterans and their families deserve.